Part Of The Pack, Part Of Our Hearts

Buster belongs to us now. We can’t imagine giving him up. Well ok sometimes I do imagine it. Just for a minute. While he is jumping up and down and up and down in front of me. When he is racing through our small house threatening to knock over lamps. Whenever we come home and find that we stupidly left a glass sitting out and now the contents are all over the carpet. Along with a cigarette butt ( not mine) meaning he hate the other half! And a spoon, a wet napkin and my husband’s reading glasses.

I think of it when he chases the cat up onto the washing machine and I see the look of hate in her eyes. Actually they aren’t doing that bad together most of the time.

I think about it when I wake up in the middle of a dog tiff in the middle of the bed with all three! Or when he won’t stop his yappy, very loud bark to ask the other two to please play with him. Or when he makes them mad by constantly nipping at them and bumping them to play.

I especially think about it whenever he wakes us up at eight-thirty and we are used to getting up at maybe eleven o’clock. And he doesn’t just get up. He starts jumping and running and playing! And he wants us to do those things also. The other two dogs don’t want to do that anymore than I do. Often times I have laid in the bed with him beside me while I dangle a chew toy rope for him to play with. All the while my eyes are shut. It buys me a few minutes. Once in a while he will lay there and chew his Nyla bone and then fall back to sleep from boredom. Not often though. 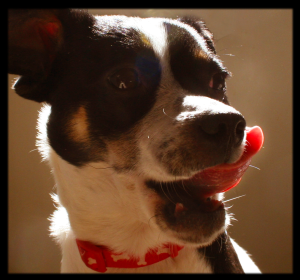 Then there are the times that he melts my heart. Laying in bed at night with him all snuggled up next to me like a newborn baby. He wants me to rub his little tummy. He looks at me with those big funny eyes. And gives me big, sloppy, happy kisses.

I love to see him running like a lightening bolt around the yard chasing one of the other two dogs in exuberant play that they haven’t engaged in for many years. He mostly does this with Darla. She loves it. She will come up to me laughing as if to say, “I’m having so much fun mommy!”

I love the tender little moments when he is so happy to be part of the pack like when one of them lets him snuggle up to them in bed. Or if he has a bad dream and one of them checks on him. Often when they are playing and he gets reprimanded by one dog, the other dog will jump to his aid.

Last night I saw him bring Luna’s favorite, purple ball to her, lay it down beside her and then touch her paw with his as if to say, “let’s play.” It just melted my heart.

It amazes me how fast he learns new things. How to sit and shake. Especially for a morning treat when he does not really need to pee. How to lick the number one dogs ears because number two does it. How to get the food out of his food puzzle toy. He learned to play Frisbee and the other two never have.

It is really like having a lovable, adorable, jumping, bumping, bouncing, running Tigger! Winnie The Pooh would be more our speed but oh well we will manage. Or loose our minds eventually. 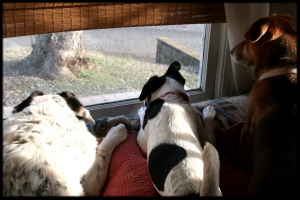 A rare moment of stillness. They are looking at the woodpecker on the tree. Buster a.k.a  The Flash, Lightening Bolt, Tigger, Speedy González, Yappy, Crazy Dog, Little Man is the one in the middle.