The Energizer Bunny Is At My House! 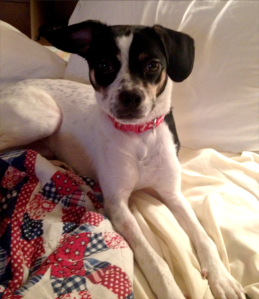 It’s difficult to get a good photo of him as he is hardly ever still! 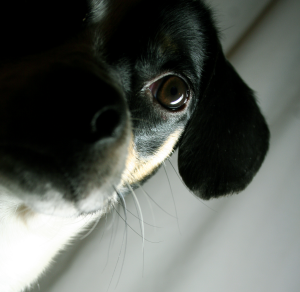 A few nights ago I had laid down for an early evening nap when I heard a desperate barking coming from a block over at the walking trail/park that is near my house. I knew it wasn’t the normal dog playing or being walked in the park bark. And my dogs knew it too and were at the window barking back. I went out the front door and could see in the distance a dog running back and forth in an area by the road in a way that told me something wasn’t right.

So I got all dressed up to go out into the cold as we are having a terrible cold snap here in the south! I drove over to the park and found a young man who had pulled into the entrance and was staring at this cute little dog who was running around and back and forth like crazy. I asked the young man if it was his dog and was he trying to catch it and he said no. He told me he had almost run over it so he stopped to see why it would be there on its own. What a wonderful, thoughtful young man!

This little tiny dog seemed so vicious as we tried to talk to it and figure out what was going on. I opened all of my car doors to try to get it inside for warmth but he kept wanting to get into our trunks. Isn’t that an odd behavior for a dog? Finally after we had been out there freezing for about 45 minutes the dog got in my car and closed all of the doors. The young man took a picture of him and posted him on Craigslist and Facebook and then I drove through all of the neighborhoods surrounding the park looking for anyone who might be looking for him. Needles to say I didn’t find anyone looking for him.

My husband and I think someone purposely dumped the poor little fellow there. The entrance to the park goes down into a cul-de-sac, so we think they drove down, put him out and when he ran around playing they drove off and left him there! Then he realized it and ran up to the entrance and began looking for them and racing back and forth confused and scared to death!

Can you just imagine how he must have felt? It was cold and dark. He had no idea what happened to his people! They couldn’t have been very good people to start with if they would do something so wretched as that. If this is what happened to him I hope it weighs on their heart and keeps them awake every night for ever. I hope they can’t eat or enjoy leisure time. I hope the little dogs cries ring out in their heads day and night.

I know the little booger is a handful! Oh boy do I know that !!!  But that is not the way to handle the situation. He didn’t ask to be a Christmas present. You picked him. When you pick an animal you are devoting your life to being a good and loving parent for the rest of that animal’s life.

My house is small and I already have two dogs who are grumpy and scared and not the most social around other dogs. And a cat who is the scardiest cat you will ever meet.  But I am taking care of this precious little dog. Is it easy? No. But with no one coming forth to claim him I don’t have another choice. I can’t bear the thought of him being in a crate all day at a shelter. The only good non-kill shelter  is almost impossible to get an animal into.

So for now his name is Buster. I had to let my husband name one of the animals. He seems more like a Buddy to me but oh well. As long as my husband wants to name him and play with him things are good!

This entry was posted in Uncategorized. Bookmark the permalink.

5 responses to “The Energizer Bunny Is At My House!”